The land is in the Cooma-Monaro Local Government Area. The street address is 398 Billilingra Rd, Bredbo 2626

The closest settlement is Bredbo (pop. 37) about 15km by road from the community house The nearest service town is Cooma (28km). Canberra is 84km away. The closest train station and airport are in Canberra. A daily bus service links Bredbo to Cooma and Canberra

The total land area of Mt Oak is 2770 acres or 1154Ha. Most of it is maintained as wilderness areas. Human settlement is restricted to the northern end at the Murrumbidgee/Murrumbucca confluence
see the map on this page

Mt Oak has a high altitude, semi-arid climate. The land is in a rainshadow caused by the Australian Alps to the West and the Numeralla Range to the East
Rainfall is less than 500mm per year.

The region has 50 frost free days per year. Overnight temperatures of -8 deg C are common at Mt Oak.
Seasonal trends in frosts and moisture show that "when temperatures are adequate, lack of moisture restricts plant growth; and conversely when moisture is adequate, temperatures restrict growth" (Table 21. and Table 2, CaLM,1994:5)

The property varies from 700m above sea level at the Murrumbidgee-Murrumbucca confluence to 1090m at Big Mountain. There are six peaks around 1000m surrounding a valley at Warm Corners. The rest of the property is gentle slopes on the plateaus and steep slopes and small gorges along the watercourses. Rock outcrops, mainly 'granites', occur throughout the site

The rocks on site are mainly granite, granodiorite and adamellite, that is, acid igneous rocks. The 'granites' on site show a variety of colours and textures. Quartz veins outcrop on the northern end of the property and black tourmaline bands can be seen in the quartz. Lesser amounts of gneiss and schist show where metamorphism occurred

Alluvium has built up on the confluence of Murrumbucca Ck. and the Murrumbidgee River, and along the drainlines. It is at least 3m deep in parts visible in the erosion gullies

The report Soil Landscapes of Cooma and Michaelago (Tulau and Jenkins CaLM, 1993&1994) describes the landuse limitations created by the soil and topography of the district.
Most of Mt Oak is the uncleared steep country of the soil landscape known as Bullanamang Gap. About 15% of the site is within the soil landscape Dromore (where the grasslands occur) and the riparian zones are within the Smiths Road soil landscape type

DR (Dromore), which comprises eroded drainage lines (these areas need to be fenced off), MC (Murrumbucca Creek) and SR (Smiths Road), comprising alluvium, drainage lines and immediate adjacent slopes; the author¹s caution that these should
"not be cleared due to high erosion hazard, including steep slopes and shallow rocky soils. The soils have very low potential fertility. Erosion hazard is increased if the understorey is damaged by grazing, feral animals or fire."

It is also pertinent to reflect upon the statement sourced from `Soil Landscapes of the Cooma¹ Costin (1954) 1:100 000, that

"The erosion damage in the district today is the result of the lack of perceived difference between resilient and unstable land. Thus the worst damage in the district is in areas, such as the Bredbo vicinity, where the land was particularly limiting and the people did not accept or realise this. The more capable and stable land received the same pressure and survived intact. The fact that erosion activity still persists in places raises the question of whether these lessons have been fully learnt."

Costin adds that "A cycle of post-European erosion is discernible from gullies in the Bredbo area. A sandier layer overlying buried topsoil marks the first movement of sediment from hillsides once clearing and grazing commenced. More competent runoff then incised valley fills (Eyles 1977). These gullies are presently deepening, although headwall extension has been minimal since the first aerial photographs in 1944."

The region is dominated by the Lachlan Fold Belt which crops out in central, western and southern N.S.W. and extends into Victoria and Tasmania. It is internally composed of anticlinorial (fold in the form of an arch) and synclinorial (fold in the form of a basin) zones with a north to north-westerly structural trend. Surface geology comprises Cambrian (600 myBP*) to Early Carboniferous (260 myBP) complexes. Granites usually occur within the anticlinorial zones. The Lachlan Fold Belt is a composite orogenic (mountain-building) belt. It was affected by four episodes of folding, strong compression, and uplift.

The Cambrian-Ordovician rocks within the belt were folded and metamorphosed during the Late Ordovician (460 myBP) to Early Silurian (430 myBP) Benambran Orogeny which uplifted large tracts of country. To the west of the Gilmore Suture (Tumut - West Wyalong), the Silurian is generally absent and during the Early Devonian (380 myBP) marine sedimentation and volcanism occurred here.

To the east, sedimentation was in deep troughs and on shallower ridges and acid volcanism was associated with rifting, basin formation, and emplacement of granites. This development began during the Middle Silurian (420 myBP) and terminated during the Middle Devonian (375 myBP) Tabberabberan Orogeny, the effect of which was diminishing from the south-east to the north-west.

Sapphire, spinel, emerald, garnet and beryl have been found in stream gravels at Tumburumba, on the western side of the Alps. Gold was mined at Kiandra and at Cowarra Creek near Numerella.

Source: Edited from 'Geological description of New South Wales' on the Geological Survey of NSW website.

The site is on the Upper Murrumbidgee River in the Murray-Darling Basin. It is on the edge between the Australian Alps and South East Highlands Bioregions. This region contains the Monaro Plains and the site is at the western edge of those plains. The vegetation of the immediate region is described as sub-alpine savannah, indicitive of the area's relative aridity. The Australian Alps, including Kosciusko National Park, are close to the south and west.

The Murrumbidgee River source is near Yarongobilly on the Long Plain Road to the north west of Mt Oak. The Tantangara Reservoir dams the Murrumbidgee headwaters, so its flow is regulated below that point. The river then runs southeast towards Cooma, then bends, around the Murrumbucca Ck Basin, to flow north past Mt Oak. Some of the water is extracted for irrigated horticulture upstream of Mt Oak.

Just downstream of the site, the Murrumbidgee river, before it reaches Bredbo, enters a small gorge which in flood times causes water to back up and flood the Mt Oak alluvial area and lower Murrumbucca Ck. Once past this gorge the Murrumbidgee River follows an old fault line northwards to Canberra. After the Alps the river turns westward until it eventually joins the Murray River at Robinvale near Mildura.

Murrumbucca Creek itself forms the western and northern boundary of Mt Oak before it joins the Murrumbidgee River. It was previously known as Sandy or Reedy Creek and still has a number of sandbanks and reed-fringed pools. This creek drains the area in the 'bend' of the Murrumbidgee River
This creek only flows after heavy rains and quickly becomes a dry creek bed with a few isolated pools 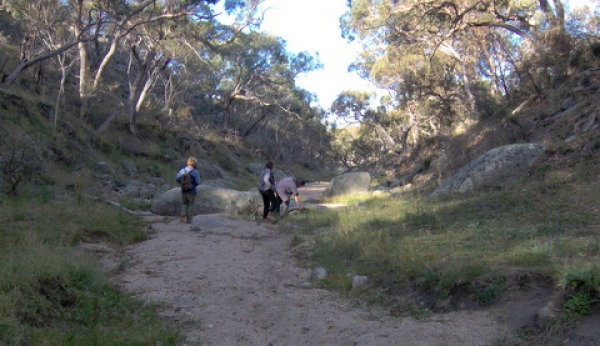